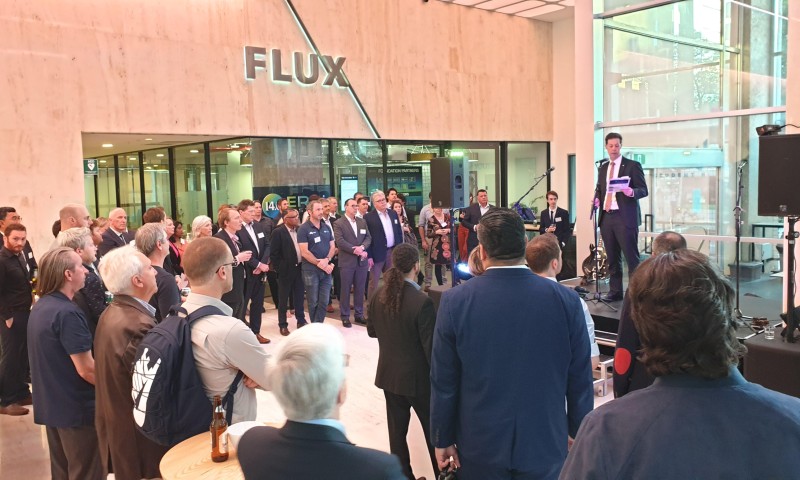 Industry, academic institutions, state and federal government and technology suppliers came together on 23 September for the opening of the i4.0 ERDi Perth City TestLab, officially launched by Professor Amit Chakma, Vice Chancellor of the University of Western Australia (UWA).

“One of the roles of the University is to serve the people of WA, and this partnership exemplifies what that might look like,” said Professor Chakma. He also encouraged industry to embrace the opportunity to work with academia: “We cannot play the role unless you allow us to, this should be a wonderful model for all of us to follow.”

One of six i4.0 Testlabs established at universities across Australia under the Department of Innovation, Science, Energy and Resources (DISER) i4.0 TestLab network program, the ERDi TestLab specialises in the development and application of i4.0 interoperability standards in the Energy and Resources sectors.

The ERDi TestLab's important role has been further recognised through additional sponsorship from two of the Federal Government’s Industry Growth Centres: NERA and METS Ignited.

NERA CEO Miranda Taylor said: “As a Foundation Partner and early supporter of the ERDi initiative, we believe the TestLabs can play a vital transformative role in the evolution of Australia’s critical energy and resources sectors by providing local supply chains with the support and skills required to capitalise on technological opportunities presented by Industry 4.0".

According to industry research jointly commissioned by NERA and METS Ignited into the potential opportunities and impact of technologies such as data analytics, automation and robotics on Australia’s mining and oil and gas industries in the next decade, the accelerated adoption of automation technologies in Australia’s resources industries could, if coordinated and well managed, add $74 billion in value to the Australian economy, in both regions and cities, and create over 80,000 new jobs by 2030.

METS Ignited welcomes the launch of the ERDi TestLab as a collaboration vehicle that will enable the transformative technologies identified as critical to accelerating Australia’s future jobs and growth.

“As the Industry Growth Centre for the mining technology, equipment and services sector, METS Ignited is supporting initiatives driving interoperability, tapping into our existing technology capabilities and transforming them into real commercialisation opportunities — the ERDi TestLab is enabling the power of Industry 4.0” said METS Ignited CEO Adrian Beer.

The TestLab is the first of its kind with respect to interoperability services and will enable energy and resources companies and technology suppliers to those industries to take advantage of the latest i4.0 interoperability approaches and realise the benefits as soon as possible.

John Kirkman, Managing Director of ETP, said: “The significant benefits offered by i4.0 related technologies such as cloud computing, AI and Machine Learning and smart and connected sensors, can only be realised if all systems involved in a given operation are able to exchange information automatically, reliably and in real-time”. To achieve this, systems need to be able to exchange information using a common language — this is where i4.0 interoperability standards come in to play.

Mr Kirkman welcomed industry, technology suppliers and systems integrators to take advantage of the Lab’s existence, by visiting the Lab and finding out how it can be of assistance in helping realise their industry 4.0 goals.

In consultation with the ERDi TestLab team and industry, South Metro TAFE and UWA will be working to develop a new i4.0 associate degree, the first of its kind globally. “There’s significant value to be realised in the partnership between the vocational and higher education sectors — and this is a fantastic example of that”, said Terry Durant, managing director of South Metro TAFE.

This, together with industry research projects such as AMIRA P1208, which is sponsored by large mining companies Gold Fields, Fortescue Metals Group and South 32, as well as industry implementation projects such as that at Gold Fields Granny Smith Mine, will address skills gaps with respect to i4.0 interoperable architectures and as such, enable more rapid development and adoption of these technologies and associated benefits within both the mining and oil and gas industries.

ERDi TestLab director Professor Eric May of UWA is also CEO of the Future Energy Exports (FEnEx) CRC, which recently received a $40 million dollar Federal Government grant to support its mission of future-proofing Australia’s energy exports through industrial-scale innovation. “The ERDi TestLab was central to our successful bid last year and will help us to deliver low-cost, low-emissions LNG as well as grow our hydrogen export industry,” said Professor May.

To organise your first engagement with the Testlab, please visit the website (www.erditestlab.com) or email Cameron Bowden at cameron.bowden@erditestlab.com or Dr Peter Falloon at peter.falloon@uwa.edu.au